The funny thing about watching all those episodes growing up is that even though I wasn’t a big fan at the time, I am now very nostalgic and appreciative of the campy costumes and plot scenarios. So ridiculous now. So inventive then. Perhaps because I am not a Trekkie (Oh. Wait. Maybe I am!), I have loved the recent movies, non judgmentally and with no expectations. Star Trek Into Darkness was one of my favorite movies of 2013. That was the year my son and I went on weekly movie dates and saw just about everything a 13 year old boy would want to see. Sucked into the movie from the opening inferno scene, we were both a bit shocked when I started sobbing at the scene where the friends press their palms together. The important cameo by Leonard Nimoy was a thrill, for this child of the 70’s. He seems like he was a wise, kind, funny, wonderful human being.

And so, I am sad. Another important person in my life has died. The third in three weeks. They say deaths come in three’s. Well, this is my third. After the death of my mother, life seems precious and fragile and too easily taken for granted.  When someone dies, it hits me hard.

I am not a business person, but I have a career in the media business. (Oh. Wait. Maybe I am a business person!) I would force myself to read business journalism, because I thought I should. For my career, you know. It was dry and boring and I had to read each sentence twice to retain the information. And then I discovered David Carr. Every Monday, he tackled the exact most relevant topic that was top of mind in media and made it compelling. Clean and honest prose, he said what he thought and revealed who he was in his writing. He loved print and embraced digital. The print world lost their champion when he died. Monday mornings with the New York Times are not the same. I am sad.

When I first moved to New York, I had my first job in the media business and had given up my dreams of being a ballerina. I didn’t know anyone, so I found friendship and familiarity in a nearby ballet studio where I took classes with other accomplished but amateur adult ballet dancers. I met Elaine at this time. She was older than me and in love with ballet. She was not a great dancer, but she had a gentle elegance and genuine curiosity and kindness for all the dancers, both the children and the adults. She was a constant touchpoint for me during that difficult year, transitioning to a new job and a new city on my own. She was a friend, though I don’t think I appreciated it then. I met my husband and stopped dancing, too busy with that career in business and raising our children. When my daughter was 7 and it became time to introduce her to ballet, I enrolled her in a different nearby ballet studio. And there was Elaine! We reconnected, though I was too busy busy busy to really resurrect much of a friendship. I returned to ballet again for a few years, but found it too challenging, both physically, emotionally, and logistically, to keep up with ballet. So I let it slip. As I let slip my friendship with Elaine. She passed away 3 weeks ago. You never think you’re never going to see someone again.  I am sad.

I didn’t know Leonard Nimoy nor David Carr.  But I did know Elaine.  Your lives touched mine and you are part of me. I honor you with deep love and appreciation. 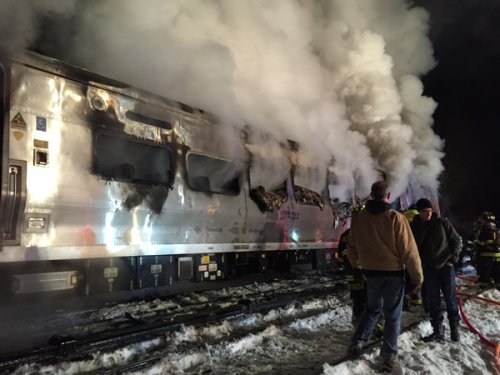 Maybe It Was An Accident

We take the mundane habits of our lives for granted, unless something goes wrong, and then we complain bitterly. Like our commutes. They are too long, too crowded, too much traffic, too hot, too cold, a time-suck. For the most part, I like my commute. A lot. Yup. I do. (I am so boring and suburban.) After our meticulously choreographed-to-the-minute morning routine gets us all out of the house precisely on time, I head to the train. Sometimes I catch a neighborhood bus where I catch up with the other working women of the neighborhood. (We have a special bond.) Usually I get a ride from my husband who commutes by car. (Commute by car? Blech!) We get a few moments to catch up before our separate days take hold.

Ah, there’s the man who stands on the platform eating his muffin for breakfast. Every day I wonder if he enjoys this rushed, mindless, unnutritious meal. Ah, there’s the gaggle of women – a bit younger than me – who spend the entire commute talking, loudly, about their kids who are younger than mine. They annoy me, seeming so privileged and superficial. I remind myself that I’m quite sure I’m equally annoying when with a gaggle of my friends. Ah, there’s the man who sits hostilely in the middle of a 3-seater, aggressively daring anyone to ask to share the seat. So selfish! Why? Ah, there’s the young married couple who seem so happily absorbed in each other. She is a redhead with porcelain skin and a lovely elegance, taller than him. Ah, there’s the older man who operatically sings. Out loud. Loudly. Is he crazy? Or maybe he just doesn’t care what people think of him? And who, I wonder, flossed their teeth on the train and threw the flossing tool onto the floor.  Really!  Gross!

All the quirks of humanity are on full display. I don’t know these people, but I see them every day. They are part of my life. Some of them have become my friends, the community of commuting.

Like most commuters, I sit in the same place, see the same people, and do the same thing. Morning after morning. Evening after evening. I read the New York Times in the morning. Paper edition. I still stubbornly prefer the serendipity of flipping through each page, scanning the headlines, until I settle on something that interests me. It’s usually not something that would show up in my Facebook feed. Long live print newspapers! My evening commute has become more oriented toward listening to music or catching up on social media. I try to read magazines or books, but, like everyone else these days, I don’t seem to have the attention span for any heavy reading on the ride home. Sometimes I get a little catnap in on the ride home. It’s a welcome transition from the fast pace of my job to whatever the evening has in store.

On Tuesday, commuters everywhere went about their day and headed home that evening. Six of them did not survive their commute. A woman a bit younger than me, with a husband and three precious teen daughters, found herself caught in her SUV in traffic on the train tracks, of my commuter line, at an intersection where my husband commutes by car. No one is quite sure what she was thinking, as the warning lights sounded and the gates came down and the train slammed on its breaks and blared its horn. She must have been terrified, confused, panicked? The train hit her, killing her and five train passengers. It’s amazing to me that more people did not die. To see the photos and videos of the fiery crash, it’s amazing that only six people were killed. My people. My community. Of commuters. I don’t know the people that were killed. But they are like me and all the people I see every day. My heart goes out to them and their families. Their spouses, their parents, their siblings, their friends, their children. Their children. Can you imagine? Mommy is not coming home because she was hit by a train? Daddy is not coming home because his train burst into flames? Unfathomable.

Everyone is looking for a reason. Something to blame. Someone to blame. The gates weren’t working properly. The warning lights weren’t working properly. The train was going too fast. All grade crossings should be eliminated. Why didn’t she move? I don’t know that there is a reason. Maybe, it was just an accident. We think the habitual mundane activities of everyday life are safe. Until they’re not. And then we remember. Life is fragile, with no guarantees. Appreciate the commute. And all the quirky, annoying, beautiful strangers who share it. Kiss and ride. Kiss deeply.  Ride safely.